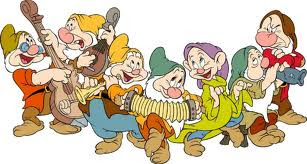 This week's task was to recreate a traditional fairy story by giving it a different twist - such as, a change in genre, location or time. After trying a few different genres and discounting several, such as 1940's gangster novel, science fiction and adult literature (which reduced me to a giggling wreck for a good hour and nearly brought on a migraine), I settled for the genre of Crime Fiction - a la Arthur Conan Doyle - and my chosen tale was Snow White & The Seven Dwarves. :) I'd have liked more time on this to tidy it up, but other studying has kinda got in the way this week, so this is a version which I'd probably like to have another two or three edits at, but as it is already a day past the time it was due then I'm putting it out in its current form.

The Case Of The Poisoned Apple.
Laying in the centre of the room, before the wide, stone fireplace, the glass coffin became the main focus for the small audience. The only sound aside from the crackling logs came in the form of hushed whispers and the occasional sneeze; all eyes following the tall man as he walked to the fireplace, stooped low and took a long, thoughtful while to light his pipe.
“Come now, Mr Holmes,” said the only one of the assembled group to wear spectacles, “why exactly have you gathered us here? Some of us have work to get to, you know.”
Several grunts and nodding of several small heads accompanied the words, although the detective appeared lost in thought and temporarily oblivious to any form of complaint. For the umpteenth time that morning Holmes walked to the coffin and peered through the glass to the unmoving form beneath the lid.
“Mr Holmes!”
Finally, the detective blinked and looked in the direction of the rather grumpy owner of the voice.
“Mr Holmes, it’s quite clear who the culprit is here. I don’t see why we have to stand here like statues, while the evil Queen gets away. Why aren’t you arresting her instead of picking on us working folk?”
A low rumble of agreement rose up from the group.
“I…I do hope that this is not a case of height-ism, Mr Holmes” stuttered a red-faced bashful fellow, “I would really hate to complain to Scotland Yard. I w...would indeed.”
Further grumblings filled the room and once more all eyes were on Holmes as he relit his pipe from the fire, before turning to face the room.
“Gentlemen, I am of course most utterly grateful for the giving of your time to assemble here and I promise that I won’t detain you a moment more than absolutely necessary.”
Holmes’s words and kindly facial expression did little to appease the small crowd, but before the grumpy gentleman could begin a new verbal tirade, the detective raised his hands in a commanding manner as if conducting an orchestra. As one, the dwarves fell silent.
“I will concur,” said Holmes, “that initially it appears that there can be only one assailant in this crime. All fingers point to the Queen…perhaps, if I may suggest, a little too conveniently for my liking.”
Indignant gasps met Holmes’s ears, but his hands dipped quickly into his coat pocket, producing approximately one half of an apple, which he held aloft.
“According to your testimony, the victim was visited by an old woman who proceeded to persuade this poor, naïve, young lady to bite upon this very apple, thus rendering her unconscious and in a temporary medical state of comatose immobility.”
Holmes watched the slightly confused expressions with interest, smiling faintly to himself as he noted the one tiny face who was the exception.
“Before my arrival here, gentlemen, I took the liberty of analysing the available evidence. The Queen keeps only one type of poison, namely rat poison within the bounds of her castle. However, the poison contained within this apple is an extremely rare combination, formed from specific crystalline compounds…or as one trained in chemistry might label it, arsenic.”
The silence in the room was broken only by a loud sneeze and a faint hum of snoring.
“Naturally, the properties of arsenic would be unknown to most people…but then you’re not most people, are you, ‘Doc‘? Or should I say, Professor Heinrich Morgan from the University of Vienna and reported leader of the infamous ‘Little Red Handed’ gang…”
The face of the bespectacled dwarf turned bright red and began a faltering, stammered reply, before quickly falling into silence.
“…Wanted by Interpol for jewel thieving in Milan…kitten rustling in Sardinia…small-arms smuggling in Barcelona and now apparently contract-killing in the Enchanted Forest.”
The front door to the compact and bijou home suddenly burst open, revealing a large group of police officers, with Inspector Lestrade and Doctor Watson bringing up the rear.
“At last, Watson!” beamed Holmes, “I thought you’d never get here. Officers! If you would be so kind as to remove these gentlemen into the safety of Her Majesty’s custody.”
Holmes jabbed an accusing finger at each culprit, as each one was led away; small heads bowed in shame.
”Smiling Boy” Smith…”Grumpy Jack” McClane…Bob “Sleepy Byes” Brown…“Shy Stan” Sinclair…Hank “Handkerchief-Howling” Harris…and of course, last but not least, the notorious brains of the outfit, “Dopey Dan” Denton.”
Watson peered at the tiny, cross-eyed face and viewed the tongue peeking from the side of the mouth with disdain.
“Brains of the outfit? Are you sure, Holmes? The fellow seems positively doo-lalley to me.”
Holmes nodded and relit his pipe from the hearth.
“Absolutely sure, my dear Watson, Denton might play the absolute fool to perfection, but then the seven times winner of the ‘North Yorkshire Gurning Competition’ would naturally fool even the most ardent of observers.”
Denton’s face fell and relaxed back into a definite scowl.
“Damn you, copper! This would have been our last job before retirement. We’d bought a little place on the French Riviera…”
He sighed loudly as a burly officer escorted him from the room, leaving only Watson and Lestrade with a clearly gloating Holmes, who paced the hearth rug in triumphant style.
“Well…” said Lestrade, “another victory, Mr Holmes. Of all your recent cases this one dwarfs all the others by comparison.”
“Indeed,” nodded Watson, “No small feat at all, Lestrade. Will they get short sentences?”
“Perhaps, Doctor Watson, after all they were 'miner' offences.”
Ever the perfect professional, Holmes ignored the childish laughter, for his eyes had fallen on the front of a newspaper which lay upon a tiny coffee table; his lips moving as he read the main headline from ‘The Hunter‘s Bugle‘.
“’Opportunist Girl Snares Gullible Prince In Glass Slipper Plot‘….hmmm, come Watson, with all haste! There is no time to waste!”
Posted by Kev Milsom at 04:07