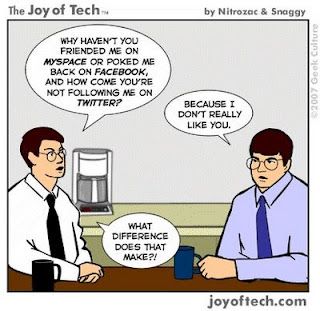 Ok, so I'm the wrong side of 40...and maybe my understanding of technology is showing the merest, slightest strains of cloudiness...to the point where my mind says 'Huh?' more than it used to...but hey, I like lots of new-fangled things...such as...well, there's Facebook...that's quite good...well, it's ok...well you can make friends on it and invite all your friends onto it...and have lots of friends...and..well, you can send them cyber presents, and silly pictures from the internet and bombard each other with acres of digital daisies, instead of talking in long, old-fashioned sentences like you both used to, or phoning them and sitting up till 5am, until you had to stop typing cos your ribs hurt so much from laughing.
And then there's Myspace...ah, ok, forget Myspace...never got on with it, never really wanted to. If I was 17, and trying to promote my own garage band, or still in that phase of life where I genuinely wanted coach loads of people to look at me with an interesting glance and wonder..."Hmmm...I wonder what makes HIM tick?"...then I'm sure that Myspace would be a gimme, and I'm sure I'd be right there in the stampede to get 10,000 faceless strangers to call me 'friend'...but, to be absolutely truthful, I'm at that age when you realise that all that nonsense is mostly a crock of horse crap, and the only thing in this often miserable, stressful world that matters is what you think of yourself...more important is that anyone who really doesn't 'get you', or tries to criticise you/your style/your individuality/how you choose to express yourself in this world, can go play chicken with the traffic, or juggle chainsaws until the screaming starts, for all the difference it will make to us and our overall happiness in life.
And so, this week - after resisting for ages - I found myself sucked into a very dull moment, or three...where not even shaking my ass at Dance Island on 'Second Life', while bouncing in my chair and hollering like the coolest of all cool werewolves, could lift me out of boredom.
And so, I flicked through webpages, as one does, until eventually I alighted on the Twitter page. Now you know when something is rubbish, but there is that little rational part of the brain that says "Oh come on...you must never judge a book by its cover...let's go wild and give it a try! Waddya say?" (Why do a lot of my inner, annoying voices all sound like very bad American car salespeople...or those poor unfortunates that trudge from door to door in a vain attempt to sell sets of encyclopedias?)
And thus, it came to pass that I joined Twitter. Well, for about 4 minutes, before it kicked me off and wouldn't let me back in for 13 hours. When I did rejoin, I was facing a blank screen, asking me to say what I was doing.
Well, duh...I'm sat in front of my puter, staring at a screen - when I could be out chasing butterflies through leafy glades, or attempting to find the universal cure for bald hamsters.
I joined the cool, British singer Lily Allen's Twitter page...because nearly half a million people can't be wrong, can they?
So, I joined...and looked some more...hang on, is that really Lily Allen? I could be typing to some 74 year old bloke in Venezuela, sat in his string vest and yellow Y-Fronts...is that really her? And if so then are we buds?
I mean, ok...there are half a million others, but hey, c'mon...we've bonded yeah? Somewhere, in a hotel room, on tour, she will flip up her laptop and my name will flash across her screen as one of the likely 500 new subscribers that day to her Twitter page...and she'll pause for a moment and think "Hmmm, I wonder makes HIM tick?"....dammit, she will, won't she? She don't need all those other people...she has ME! We're tight and we know it.
And hey...I can now say to complete strangers..."Ya know that Lily Allen? Hah...we're mates. Yeah, she tells me everything. Never off my laptop...we sit up tweeting at each other til 5am...God, my ribs..."
So, there's me and Lily...and some complete stranger who wants to sell me things that I don't need and keeps asking me if I want to chat, 'for our mutual advantage?'...but I'm playing it cool, cos even if I never hear from Lily in person then I will know, deep within my heart, that she's out there...and waiting for me to post something relevant and very 'now' on her Twitter...such as 'I am eating toast', or 'The sun was very hot today', or 'I found Jesus in the clouds and He smiled at ME!'.
Lily would respect that.
I know she would - we're tighter than clingfilm, man.
Posted by Kev Milsom at 09:40