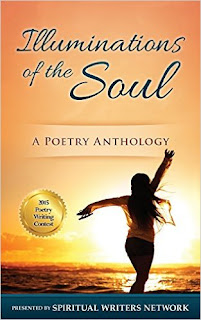 2015 was an interesting year.  Most of it wasn't too good for me, especially health-wise, and this was exemplified in my almost non-existent work output during the latter half of the year.
Goals and targets set in the flush of optimism that was the 2015 New Year sadly disappeared from view.
Mostly.

While my target of adding 100,000 words to my first novel fell at the third fence and flatly refused to get up, there were some interesting developments from surprising areas.
At the start of 2015, I decided to focus solely upon getting published and finishing the novel, 'Age of Bronze'.  The first part I achieved with a poem in an anthology with the 'Spiritual and Writers Network'.  We won't mention the second part again, but there was an unusual twist towards the end of the year.

There is something about seeing my name in print that seems to propel my confidence upward.  By August, I had practically given up with writing - instead choosing to lose myself in swathes of self-defeatist gloom; wondering if I had lost my writing edge and whether if total submission was the only option open.  It was fun...I tried...well, I mostly tried...well, partly.  Sometimes.
Anyway, I tried.
In August, I received an e-mail saying that a poem called 'Sanctuary' was going to be published in a book called 'Illuminations of the Soul'.  OK, it's not the 'Man Booker Prize' and I'm not earning a penny from it - so there goes the private helicopter for another year - but it's still something to be proud of.  Well, it is for me.

Something about seeing my poem (pages 30-31) snapped me out of a depressive fug.  Just long enough to provide the ammunition for a single shot and create a positive response.
The day after seeing my poem in print I was still riding the highs of confidence...sadly ones that had been missing since the beginning of the year.  I was milking them and riding them for all they were worth.  I also knew that this would likely wear off very soon.  So...now then...how to make use of this 'high as a kite' feeling?
Now, I've always had a passion for ghosts and the paranormal.  Well, not so much a 'passion', more of a yearning to understand more about it all.  Growing up in two badly haunted houses will do that.
I sat at my desk in unusually elated fashion and thought about doing something brash.  My battle plan was simple - stick to what you know and go from there.  Well, I know about ghosts...I'll write about them.  But a ghost book would take ages and I only have 'x' amount of positive fuel left in the tank. Something quicker.  A magazine article?  Great, but I've never written one before.
'Who cares?' says the positive part of my brain, now floating on all the positive waves and hula dancing to its own rhythms.  'Find somewhere to write an article and wing it'.
An hour later I'd sent off a message to the editor of a successful and glossy paranormal magazine.
Basically, my e-mail went something along the lines of:
'Hello, I'm Kev.  I write things.  I could write things for you.  Hell yeah.'
A day later, just as my bravado was wearing thin, I got my reply, which basically said something like:
'Hello Kev.  Could you write things for us?'
Hell yeah!

And so I did.  A lot of research and planning later, two articles went out in different editions of 'The Spectral Times'.  All forged from confidence at seeing my name in print.  Without that moment I would never have believed in myself enough to ask the question to the magazine editor.  Without that burst of confidence I'd have never have thought I was able to write an article at all.  Now, buoyed by kind comments from the editor, I know I can do it.
What's more, the confidence from seeing my name in print again (twice) has fuelled even further confidence.

This has meant that 2016 has started much more positively.
By the beginning of February I have had two submissions accepted - both poems.  One for the 'Lakeside International Journal of Literature & Arts' and another for the 'Spiritual Writers' Network'.  This again has inspired me to gain more confidence to return to my novel.  Another competition is being aimed at for the end of March.  After that I want to add 70,000 words to my novel.  My research for this novel has just exceeded 23 pages and I have hand-written notes, maps and charts all over my walls.  I'm pumped and buzzing.  This is what I want to do with my working life and I know it's all down to me.  My choices - whether to fill my days with darkness and regret or to fight back and seek illumination.

I can blame life and the universe for not giving me this or that.
I can lay a multitude of fault at the feet of stress and worry.
But ultimately, I steer my own ship in this lifetime.
The buck stops with me.
Posted by Kev Milsom at 09:36